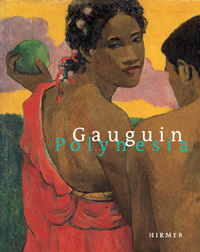 The Art Centre Basel is pleased to present the accompanying catalogue for our exhibition ‘Gaugin Polynesia‘ at Copenhagen (DK), Ny Carlsberg Glyptotek from September 24, 2011 to December 31, 2011 und at Seattle, WA (USA), Seattle Art Museum, from February 9, to April 29, 2012.

This publication presents, for the first time, a balanced contextual analysis of the complex and dynamic relationship between the works of Polynesian art that Paul Gauguin encountered upon his arrival in Tahiti in 1891, and the artist’s works they inspired and influenced. The book shows over 60 works by Paul Gauguin, fully revealing the extent of the influence of Polynesian art and culture on his work while also highlighting more than 60 works from the Pacific that exemplify the dynamic exchanges of Pacific Islanders with Europeans throughout the 19th century. The evolution of this fascinating encounter between European and Polynesian culture also focuses on the larger development of art in the Pacific in the era following its first European contact. Twelve insightful and original essays about Paul Gauguin and Polynesia, written by eminent scholars in the field of art history and ethnology, present the development of Polynesian art before and after Gauguin’s stay in Polynesia at the end of the 19th century.

“The contributors to this volume have successfully transformed the often-romanticized topos of Gauguin and the South Seas into a more nuanced assessment of what constituted the Polynesia of the artist’s imagination and the one that he actually encountered during his visits and final residence there in the 1890s. The range of inquiry is broad, from Gauguin’s introduction to Polynesian culture at the Javanese Pavilion at the Paris World Fair in 1889 to the history of French colonial experience in the South Pacific in the eighteenth century. As a result, the discussion of Gauguin’s dependence on indigenous art is precisely informed: often, one is shown what motif from which native artifact Gauguin employs in his painting, sculpture, or drawing. The selection includes a great many unfamiliar works and numerous contemporary photographs of people and sites that Gauguin knew intimately. This is an important addition to the Gauguin lierature. Highly recommended.” Choice Reviews Online